Known for Back-to-Back Houses, Workshops, and Manufactories (The Victorian Era) 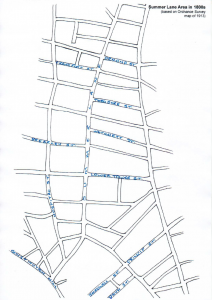 The Summer Lane area of Birmingham was known for its back-to-back houses and workshops/manufactories.  At the beginning of the 19th century Summer Lane was considered a reputable area, but as the years passed, the houses and accompanying courts became significantly overcrowded leading to many health problems.

Those who could afford to, left the area, leading to an increase in poverty among those who were left.

As part of the slum clearance during the 20th century, most of the houses were demolished and a number of the roads disappeared.  Below is a map of the area based on an Old Ordnance Survey Map dated 1913 (click on the map to enlarge).