An Alternative Name for Child Killers (The Victorian Era) 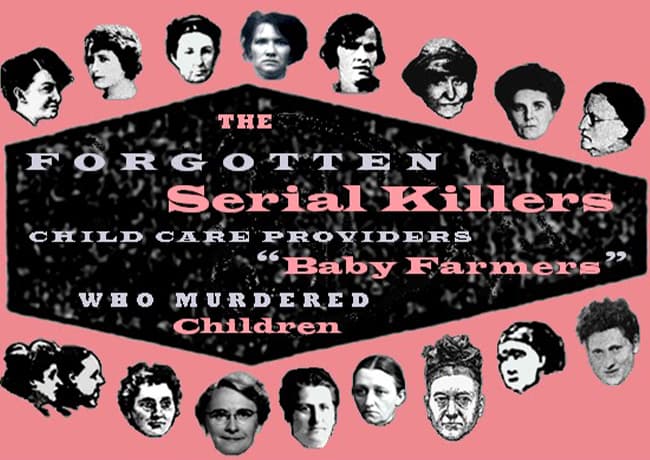 The phrase “baby farmer” is a derogatory term coined in the second half of the 19th century. It was used to describe someone, typically a woman, who took in and cared for the children of other women, but who was usually judged to mistreat them.

For years, women who needed to work (such as unmarried mothers or those whose husbands couldn’t work) had placed their children with ‘nurses’ or ‘foster mothers’, paying a weekly sum to cover food, clothing and expenses. Typically, the women lived in rural areas and placed their child with someone locally where they could visit the child when time permitted.

During the early 19th century the system worked well for both the mother and ‘nurse’. The mother was able to earn enough money to pay for the child’s care as well as her own expenses; while the ‘nurse’ earned enough money to allow her to remain at home and care for her own family. Sometimes the woman would take in several children at a time to increase her income.

With the advent of the industrial revolution, women were attracted to urban areas where jobs were more plentiful and wages higher. The countryside was considered healthier for young children, however, and so women living in towns would often place their child with women in rural areas. Sometimes they would know the ‘nurses’, but if they didn’t, many resorted to answering advertisements from women offering to look after newborn babies. Not only did this mean they were leaving their babies with strangers, it also meant that due to the greater distances between them, visits by the mother to see her child were infrequent.

A Disaster Waiting to Happen?

Around this time, some ‘nurses’ or ‘foster mothers’ began demanding lump sum payments to take care of the child, sometimes in addition to the weekly fee. For women who wanted a more permanent child-care solution and were prepared to hand over their children to be re-homed, paying an upfront lump sum was an attractive option. They would typically hand over their baby plus £10 to £15 pounds in cash (approximately £1,000-£1,500 in 20141) in the hope that the child would be re-homed. Fortunate babies would be sold to childless couples while others were fostered/adopted for a few pounds. The lump sum would cover any intermediate costs as well as provide a fee for the re-homing service. For women who were desperate, this was a quick and simple way to pass on the child with few questions asked. In most cases, the mother genuinely believed she was placing her child with a caring nurse.

By the 1860s, some ‘nurses’ realised it was more lucrative if there was no baby to take care of or re-home. By disposing of their charges, they could keep the lump sum for themselves and cut down on expenses. This led some to take in numerous children and deliberately neglect or murder them. For example, the infamous “baby farmer” Margaret Waters gave her children repeated doses of laudanum to keep them quiet and suppress their appetite. She knew that before long they would die quietly of starvation. Others were less subtle and resorted to actions such as strangulation, suffocation and drowning.

Between 1870-1909, a number of women were tried for the murder, manslaughter or criminal neglect of babies; in the UK eight were found guilty and subsequently hanged.

As a result of the publicity surrounding these cases, towards the end of the nineteenth century, controls were put in place for the adoption/fostering and provision of care for babies who could not be looked after by their mothers.

The first was the Infant Life Protection Act of 1872. This legislation made it compulsory for anyone taking in two or more children less than one year old to register with the local authorities. Unfortunately, it did little to stop the abuse of children. In 1897 the law was changed to cover children up to the age of five. At this time, ‘nurses’ were also required to register the name, age and sex of the child with the local authority, as well as the name and address of the person who handed the child over. The legislation also introduced ‘Infant Life Protection Visitors’. These ‘visitors’ were expected to seek out those who might be ignoring the Act and, if necessary, remove any child they believed to be in danger and place them in the care of the local Poor Law Union.

Despite this, however, a number of exemptions remained. Women who only took in a single child at a time were not required to register; nor were relatives, hospitals or similar institutions. Perhaps the most naïve and harmful exemption, however, was given to anyone who bought an infant for a premium of £20 or more (approximately £2,300 in 20141). This was on the assumption that anyone spending that amount on a child would surely do it no harm.